The small municipality of Ares stands out for its quiet beaches and picturesque architecture. These elements give charm to almost any corner you visit.

Ares, traditionally dedicated to fishing, preserves many of its old sailor-looking houses. These stand out for their wooden balconies, used to hang the nets of the boats.

One of those magical places is the small village of Redes, whose name evokes the fishing importance of its port. Its peculiarity is that the houses are on the seashore and the sailors moor their boats at its doors.

The monumental value of Ares is worth mentioning, such as the churches of Santa Olalla de Lubre, Cervás, San Vicente de Caamouco and the hermitage of Nosa Señora da Mercede. In addition, distributed throughout the municipality, five pre-Roman forts are preserved.

A must-see is the monastery of Santa Catalina de Montefaro, built in Romanesque style. It was founded in the 14th century by Don Fernán Pérez de Andrade O Bo and inhabited by the Franciscans. Already in 1837 it passed into the hands of the Army. Municipally owned, it can be visited on weekends and every day in the summer. 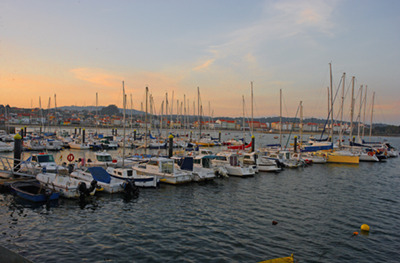