Industrial tourism, ethnography and nature characterize the municipality of As Pontes. In addition, in the so-called “town of the hundred rivers” up to eight medieval and Roman bridges that give an account of its past are preserved.

Its industrial landscape is dominated by the towers of the thermal power plant and its chimney, the highest in Europe. The plant was fed by the lignite mine, now closed and turned into a lake. This involved the rehabilitation of the environment to turn it into a natural space of great value.

Lake As Pontes, with a beach and two islands that will be a refuge for different birds, is added to the other areas of ecological interest that we can enjoy in the municipality. We are talking about the Fragas do Eume and the Sierra de Forgoselo, which can be discovered with the five signposted routes that exist.

For a more cultural plan, As Pontes offers you two options: the Monte Caxado School Ethnographic Museum and the Casa do Mel de Goente, at one of the entrances to the Natural Park. 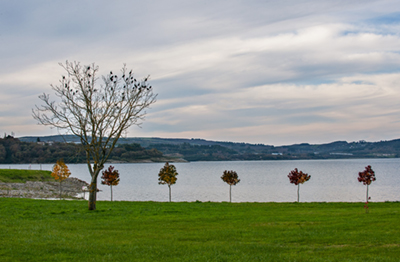