Ferrol is the city of contrasts. The estuary that bears his name, its medieval streets, military buildings and fortified castles.

The city is built in its relationship with the sea. Shipyards are born on its shore. The construction of large ships is the activity that characterizes Ferrol since the 18th century. It then became an industrial city, at the forefront of modernity.

Its military and industrial tradition still survives in the emblem of the city, the Arsenal, which is still used by the Spanish Navy. In it we will find numerous items classified as Assets of Cultural Interest.

Another military construction in the city, and the main tourist attraction, is the San Felipe castle. Located at the entrance of the estuary to control maritime traffic, the stone building that we see today dates from the 18th century, although the primitive construction dates back to two centuries earlier.

In the center of Ferrol we find other emblematic buildings. For example, the Parador Nacional de Turismo, a stately mansion with a seafaring air, and the Jofre Theater, one of the most important works of theater architecture in Spain.

However, Ferrol is also nature. It is enough to get away from the urban center to discover spectacular, almost virgin beaches, such as Doniños. 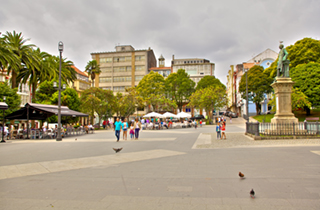