In Mugardos you breathe and, above all, savor its marine atmosphere. It is enough to walk through the Cantón da Mariña to taste the internationally recognized octopus a la mugardesa in one of its restaurants. He is paid tribute every July at the Festa do Polbo, declared of Tourist Interest in Galicia.

Also of maritime character is its picturesque architecture. Many of the houses preserve the galleries, so typical of the Coruña coast. The port of the place of O Seixo draws attention for its houses with brightly colored windows and balconies. There we also find Indian mansions from the end of the 19th century, such as the Chalé de Esperante.

Mugardos also allows you to enjoy military and religious architecture. The best example of the first is the castle of A Palma, which dates back to the 16th century. It is, without a doubt, the town’s greatest treasure, both for its building and its history and for its natural environment.

There are many religious samples of the municipality. The one with the greatest artistic value is the church of Santiago de Franza. Neo-Gothic in style, inside is the Renaissance tomb of Pedro de Sillobre, a nobleman from the 16th century. 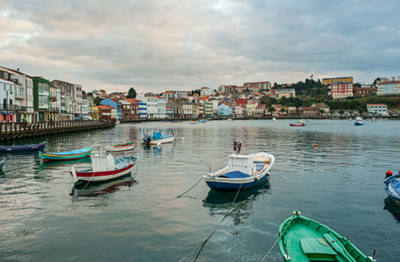