Of industrial life, Narón hides a great architectural and landscape interest. Discovering the municipality means finding ourselves with more than 200 points of interest.

A good example of this is the Romanesque church of San Martiño de Xuvia, the prehistoric cemetery of Monte dos Nenos, as well as the three existing pazos and examples of medieval houses.

Narón also boasts of his Celtic past, with 17 mámoas (tombs) cataloged in the village of Sedes. It is here that the Celtic Oenach is celebrated every summer, a festival that recalls ancient traditions.

From its industrial tradition, five mills are still preserved, such as the one in Xuvia and As Aceas. This tidal mill, built in the 18th century, was one of the main flour factories in the 19th century.

Of the samples of religious architecture, the monastery of San Martiño de O Couto stands out above all. The current building is from the beginning of the 12th century, rebuilt in the 18th century. The monastery is declared a National Artistic Monument. Here begins the old road to San Andrés de Teixido, one of the most famous pilgrimages in Galicia. It is also a place of passage of the English Way to Santiago de Compostela. 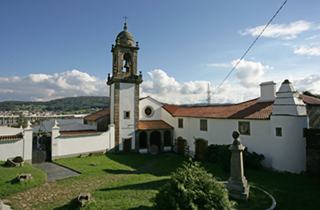