San Sadurniño is an inland and rural municipality. Located on the slopes of the Grande de Xuvia river valley, it is the ideal destination to enjoy the beautiful natural surroundings and breathe tranquility.

San Sadurniño preserves various buildings from the time when it was the administrative center of the region. Among all, the castle of Naraío stands out. This 14th century fortress is located at an altitude of more than 300 meters. From this enclave, the views are amazing.

In the municipality, the 16th century O Rosario convent stands out. It is interesting because it preserves the cloister with seven semicircular arches on each side.

Another monument worth visiting is the pazo de la Marquesa de San Sadurniño, now the seat of the City Council. The pazo draws attention for its 19th century glazed gallery. At the time, also the French-style gardens with exotic elements. In 2013 the City Council rehabilitated the surroundings of the pazo to recover the noble spirit that they had had. 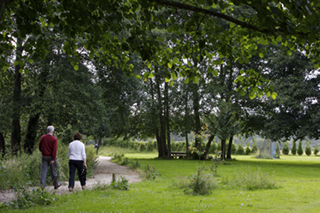